Geogrid is used for reinforcing load-bearing layers such as road bases and subbases. It is manufactured in a number of different mesh sizes. Through this adaptability, geogrid achieves an excellent interlock between the materials in the aggregate base layer and the subgrade. Geogrid confines the aggregate base layer and reinforces it against short-term, dynamic loads, effective immediately after installation.

• Reinforcement: geogrid dramatically increases the bearing strength of aggregate bases and subgrades in paved and unpaved roads. Geogrid distributes the applied loads, for example concentrated loads, over a larger area. This greatly reduces the required bearing capacity of the underlying soils. Trials have shown that geogrid mobilizes the forces it carries into the surrounding material even at low strains and therefore offers a high degree of soil reinforcement.
• Confinement: geogrid confines the aggregate base layer. Lateral displacement of the aggregate is prevented by interlocking with the grid. Shear tests in the boundary zones confirm this behavior. The ribs of the grid support the aggregate and promote bridging. Applied forces (e.g. wheel loads) are spread over a considerably larger area, thus increasing the bearing capacity of the road.
• Separation: geogrids can be produced with a mechanically attached nonwoven backing to them suitable for use as a separation and filter layer. Grids can be combined in the factory to act compositely (Duogrid). This saves the extra work on site of laying them separately.
Geogrid is manufactured in different standard mesh sizes and can be adjusted to provide the best solution in any situation. The optimum mesh size prevents particles breaking away from the composite aggregate base and migrating into the softer subgrade. In addition, if no voids can form in the aggregate base layer, then fine particles from the subgrade cannot penetrate it.
• Robustness: geogrid is up to the harshest site conditions. Manufactured from high strength polypropylene yarn and given a polymer coating, the geogrid is protected against installation damage and UV radiation. This means geogrid is hardwearing and durable. Laboratory and field tests confirm these properties.
• Geogrid’s range: the strength and robustness of geogrid 20/20 ensures that it fully meets the demands of most aggregate base layer stabilization applications. Geogrids 30/30 or 40/40 are available for higher loadings and extreme conditions. Non-standard versions of geogrid can be supplied for larger orders. With small mesh sizes, the edges of the geogrid are specially finished so that the interlock with the surrounding material is not reduced. 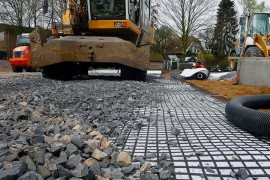 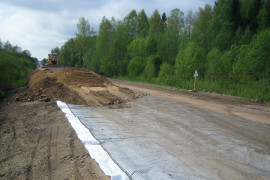 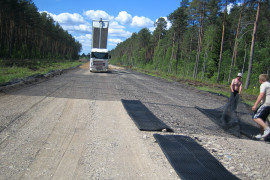