WHAT EXACTLY IS A SEAWALL? 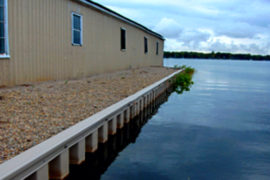 A seawall, also known as a bulkhead or retaining wall, is a defense to reduce the effects of strong waves and to defend coastal land from erosion. The term is typically used to describe walls built on the land parallel to the coast, but may also apply to breakwaters which are built in the water. A seawall’s job is to hold back soil and to act as a barrier from water pulling the soil into the water, causing erosion and property loss. A seawall is comprised of several items which are all critical in the long term performance of the structure. Seawalls encounter some of the most brutal conditions of any structure built today. From heavy loads and extremely corrosive salt water, to marine borer attacks and violent storms-conventional materials just don’t get the job done. Today’s seawalls and bulkheads require advanced materials capable of performing over the long haul in this brutal environment.

In the past, seawalls and bulkheads made of chemically treated wood, concrete, or steel deteriorated quickly in the marine environment. Now, property owners around the globe are enjoying picturesque, long lasting seawalls made of advanced plastics, composites, and marine grade aluminum. The primary component of your seawall is sheet piling. Patented ShoreGuard sheet piling system completely interlocks erosion. 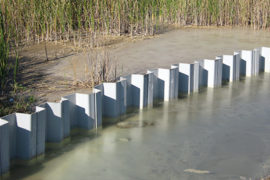 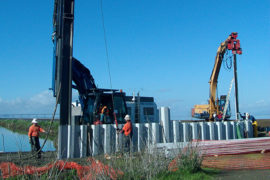 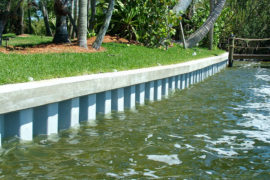